The Depolymerisation of polythene and polypropylene

Reduction of Copper(II) oxide to copper with hydrogen 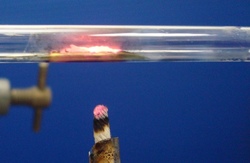 This activity explains how copper(II) oxide can be safely reduced to copper with hydrogen. Water is seen at the end of the Pasteur pipette.
The large scale version caused an incident that lead to the prosecution of a teacher by the UK Health and Safety Executive. The drying-bottle containing concentrated sulphuric(VI) acid used to dry the hydrogen, exploded as the unused hydrogen was ignited. Many teachers stopped doing this demonstration. Alternative suggestions such as using methane or including ethanol in the system complicated the chemistry so that students did not know what was going on. See https://www.youtube.com/watch?v=b9UF6wycia8.

In the traditional set up, there have been many reports of cold water being drawn up the delivery into the very hot boiling or test tube resulting in a sudden and sometimes quite violent shattering of glass. The spirit burner provides enough heat to start the reaction but not enough to cause the glass to bend. This would occur at about 690C. Go to this site for a video https://www.youtube.com/watch?v=qQh2YXyFD7I

The electrolysis of molten salts 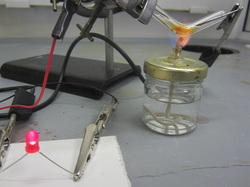 This is a very important demonstration to help the understanding chemistry. It has normally carried out with lead bromide but anhydrous zinc chloride works as well but without the colour of the bromine to indicate the formation of the element at the anode. The large scale version takes a long time to obtain a result and has to be carried out in a fume cupboard. However, with such small amounts used, I have carried out the procedure on the open bench and never detected the bromine other than by colour. This microscale procedures requires 7mm medium wall borosilicate glass tubing. See https://www.youtube.com/watch?v=LwwmRP8Zpaw.

The traditional procedure used boiling 6M sodium hydroxide in a beaker. The test tube contains solid sodium hydroxide which cannot be touched by the student.
Go to this site for a video https://www.youtube.com/watch?v=nkF712_NmeM

Diffusion of ammonia and hydrogen chloride

The large scale version required a fume cupboard and visual access is poor for students. All that is required here is to link two Pasteur pipettes with silicone tubing and  dip the drawn out ends into concentrated ammonia at one end and concentrated hydrochloric acid at the other . After a minute or so, a white disc of ammonium chloride appears but not at the centre. It is offset to the hydrochloric acid end because hydrogen chloride is heavier gas. It could even be carried out by the students. Go to this site for a video https://www.youtube.com/watch?v=XV8LojqCz-A&list=UU2ZRkBjqUw5-CW7vB-g0Xcw

Using less than 1 g of Thermite mixture, some ignite powder and a magnesium food, this event is prepared and over in less than a few minutes. The smoke is contained in the 1 litre beaker which is placed over the reaction so that no fire alarms are activated. With a magnet, the iron can be extracted from the small tin of sand used to house the reaction. 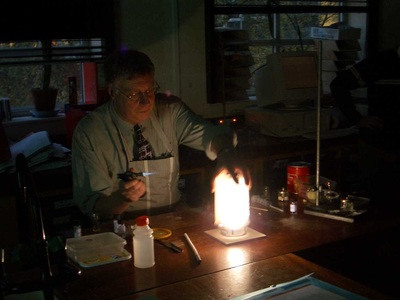 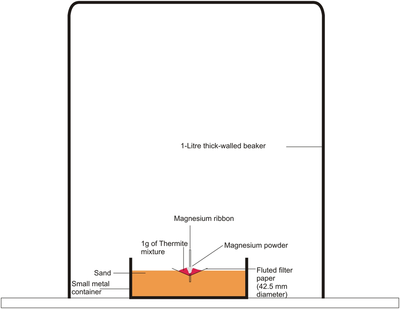 A electrochemical method involved placing copper metal in hot 6M sodium hydroxide containing zinc powder. This method involved making a dilute sodium zincate solution with a zinc anode and a copper cathode which is electroplated. An extension to this is to pass the zinc-coated copper through a hot flame and the zinc melts into the copper to form brass which looks like "gold". Go to this site for a video https://www.youtube.com/watch?v=qG6pnr1Ywc8&list=UU2ZRkBjqUw5-CW7vB-g0Xcw